Twisted Throttle and Beyond!

It’s actually Day 64 now, but I didn’t get anything written yesterday.  When I left the Super 8 before I was half-way to Twisted Throttle, I had rolled over 19,000 miles for the Epic Ride and 25,000 for the year.

At Twisted Throttle, they were waiting for me with my new Givi topbox and the silver cover, lights for the Givi, and were ready to troubleshoot my driving light issues (they were blowing fuses pretty quickly).  I’d been sitting there in their lounge area, trying to resist the temptation to buy one of everything they had (and they had LOTS of stuff, all very well presented and very, very, very tempting.

I was talking to a man from Connecticut who was having his Wee-Strom worked on when a ruggedly-handsome, tall and lanky man walked in.  He and the Wee-Strom were talking and he looked over Wee-Strom guy’s shoulder and said, “Hi, Phil.  How are you?”

Mac only lives about 20 miles or so from Twisted Throttle and he knew I was going to be there so he came over to harass … excuse me, visit with me.  He hung around for two or three hours and I really enjoyed meeting him and the Wee-Strom guy (who, by the way, is running for King of the World).

Since Twisted Throttle did have a 120/70X17 Michelin Pilot Road 3 I decided to go ahead and replace my front PR3 which was at 18,982 miles.  I think it would have gotten me home, but this tire has a lot more tread on it.

The Givi installation went quickly, but the Denali troubleshooting did not.  Several times they thought they had things worked out and then the fuse would blow.  When I got there I had told them that there seemed to be moisture in the right light pod, but they didn’t think it was inside the pod, just behind the plastic lens.  As they were working, they seemed to be convinced that the problem was somewhere in my slightly-less-than professional wiring job.

After their 3rd or 4th try and still no joy, I asked if they’d looked at the pod with moisture in it and they decided to check that.  It turned out that the light was full of water and that was the short.  They replaced that light under warranty and I decided to also add an Admore light bar that has LED tail-light, brake-light, and turn-signal lights.

One of the neat things about Twisted Throttle was the Project Bikes.  I saw several that I can’t tell you what they were, but the Wee-Strom and the NC700X were very impressive.  I should have gotten pictures of them and of Mac, but I didn’t.  My bad…

Finally by 5, they were finished and I left after an enjoyable day to ride to my old high-school friend’s house in Cataumet, MA, near Woods Hole and Falmouth.  Other than about 10 miles of backed-up traffic south of Providence, Rhode Island, traffic getting out to the Cape Cod area, it was an easy ride.

Today, Elliot and I went out for a brief cruise on his 24′ Grady White fishing boat.  It was great! 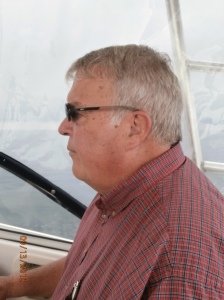 The Cleveland Ledges Light near the mouth the Cape Cod Canal. 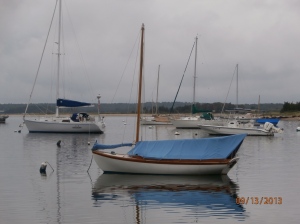 Elliot’s family Herreshoff 12.  I’m hoping we’ll get some wind and be able to sail on Sunday.

The Merchant Marine Academy is off the Canal.  This is one of their training ships, the USS Kennedy.

A sea-going tug at the Merchant Marine Academy.

And some of the yachts on their moorings near Elliot’s family’s house:

Later in the day, Elliot and I drove over to Woods Hole and saw some more boats and watched one go through the drawbridge there.

Elliot, Dudley, and me.

Elliot and his wife Gail… 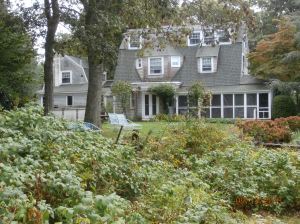 The family home.  Gail’s mother told me that she and her husband bought it in 1946 …. for $12,000.  Whatcha’ wanna’ bet they could get a few dollars more for it today?  It’s a beautiful place and I love the surrounding area.  On my way here yesterday I passed the sign for Fairhaven, the town where Captain Joshua Slocum built/rebuilt the Spray, the sloop he sailed alone around the world in the late 1800s, and the boat which inspired my Cape Breton Island friends, Fred and Margaret Lawrence to build their ship the Double Crow.