I would have posted an update last night, but the night guy at the Comfort Inn  here in Mifflinville, PA, was baffled by the task of resetting the router and I couldn’t get online.  This morning I can, but I need to get on the road.

It sounds as if my route home along I-80 might not work due to the big bolus of water going down the Platte after the flooding in Colorado.

It’s past Fort Morgan, but the Weather Channel just said that it would probably close 80 in Nebraska by Thursday.

Oh, well…  My routing issues are nothing compared to what the people along the streams in Colorado (and the people in Mexico) are enduring.

Oh, I just realized that today’s ride let me color in all but one of the states on my “States Ridden In” map.  I still lack Hawaii and probably won’t ride to get there, but the day may come when I manage to ride while I’m there.  We’ll just have to see on that one!

….and here are the provinces I’ve visited 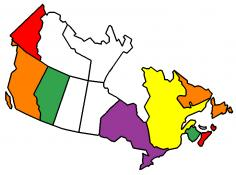