Today we rode from Valdez to Anchorage and are at a fellow NT-Owners Forum member’s house.  Marcus Holmquist owns one of the slower red ’10 NTs that amazed Jim and I when we saw it.  We’d forgotten how nice the NT looks when it’s clean.  🙂

Marcus and his wife Irena have a lovely home, a delightful 5-year-old, and Irena’s Russian mother.  Irena is an internist and Marcus (a Swede with a green card) runs the aviation simulator operation at the University of Alaska.  They’ve got a beautiful home and are wonderful hosts.

The ride today was what we had yesterday but with the different perspective of going in the opposite direction.  Then at Glennnallen we turned west on the Glenn Highway and rode to Palmer and then Anchorage.  There was more scenery that took your breath away:  views of Prince William Sound (the port of Valdez is on the very north end of the Sound); the Matanuska Glacier, more mountains; Tazlina Lake; the edges of Cook Inlet, and then Anchorage itself, which is definitely a big city, with rush hour traffic and everything.

A couple of neat things happened in Valdez.  One was meeting an Australian couple, Adrian and Lauren, who are on a BMW R1200GSA, riding from Prudhoe Bay to Ushiah (spelling?) which is the southernmost point you can ride to in South America.  Adrian rode a Wee-Strom from London to Sydney in 2009 and met Nathan Milward, author of “Long Ride Home,” in Kazakhstan.  “Long Ride Home” is Nathan’s story of riding a “Postie,” a 125cc Honda mail delivery from Australia to England.  If you haven’t read it, I recommend it highly.

Adrian and Lauren have blog at www.twobytwowheels.com that will be fun to follow.

The second neat thing was eating breakfast in Valdez.  The place (advertised as the best burgers, but also the best breakfasts had limited seating.  The owner asked me if I minded having others seated with me.  I didn’t, of course, and ended up seating with a young couple and their friend.  The couple were a native of Valdez, who’s a petroleum engineer for British Petroleum, working in Wamsutter, WY.  They live in Rock Springs, WY, and she’s a yoga instructor in Salt Lake City.  Their friend is a teacher at a Christian school in Indonesia.   They were the kind of young people who give me hope for our future. 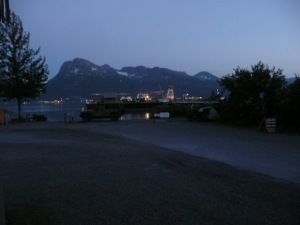 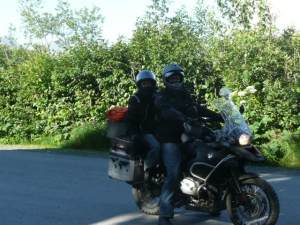 Adrian and Lauren on their way to Patagonia. 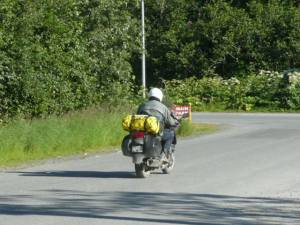 Jim hit the road before I ate breakfast so he could stop and take pictures.  We reconnected at Glennallen. 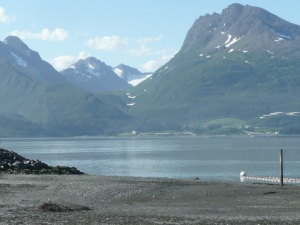 Across the bay (?)/sound (?) you can see the terminal of the Aleyska Pipleline from Prudhoe Bay where the tankers take on crude.  The young petroleum engineer I met at  breakfast told me that the pipleline is carrying much less oil than when it was new.  The field is now 35 years old and production is declining. 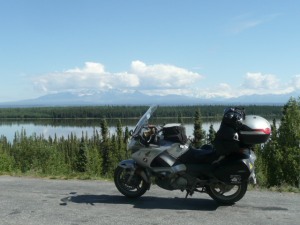 Under the clouds is Mt. Drum in Wrangell-St. Elias National Park. 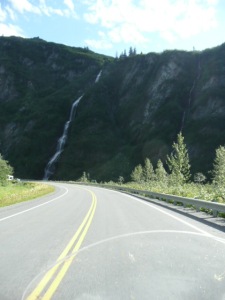 Bridal Veil Falls in Keystone Canyon on the way out of Valdez. 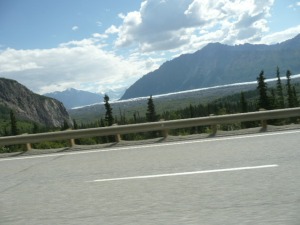 The white streak is the long outflow of ice from the Matanuska Glacier. 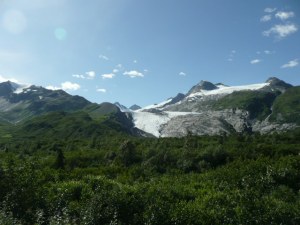 From yesterday:  the Woodward Glacier on the way into Valdez. 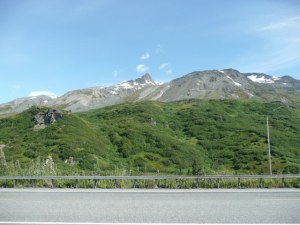 This was on the way down into Valdez and the picture doesn’t do it justice. 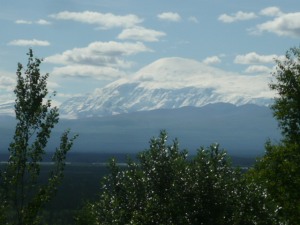 The best view we got of Mt. Drum… from yesterday. 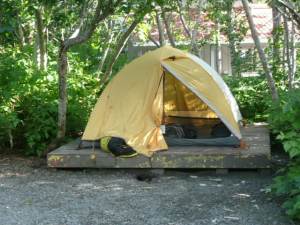 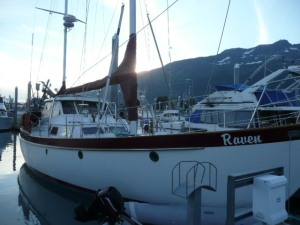 The “Raven” is a Trans-Pac class boat designed by Chuck Paine.  The captain was sitting in the cockpit and we talked for quite a while.  He’s a motorcycle rider, too, having had the gamut of BMW touring machines and is now the owner of a K75RT, because he can fix it.  He’s got a couple of spare final drives…just in case.

5 thoughts on “ANOTHER Incredible Day!”