The Most Beautiful Ride We’ve Ever Taken

Jim and I are in agreement that the ride today was the single most beautiful one either of us have ever taken.  We didn’t get away from Banff until probably 10:30, after we sat in McDonalds while I updated my “Canada, Oh Canada” post.  We stopped at Lake Louise for gas and it was, as we might call it down in Texas, a goat-rope.  There were lines of cars, RVs, and trucks, and they didn’t have pay-at-the-pump.  Jim had to go inside and leave his card, come out and pump the gas and then go back in and sign a ticket.

But then, after we went through the entrance to Jasper National Park (for free since our admission for Banff National Park covered Jasper as long as we entered before 24 hours was up), the scenery began to blow our minds.  On both sides of the road there were the most incredibly rugged peaks, with formations deformed by the uplift that thrust the Canadian Rockies into existence.  The Canadian Rockies are formed of mostly limestone and shale, whereas the US Rockies are metamorphic gneiss and granite.  They are much more jagged because of their glaciation and they have a lot more vertical relief (the distance from base to peak).

But we weren’t considering the technicalities of geology; all we were thinking of was the beauty we were witnessing.  It seemed like it went on and on and on.  But it was only 145 miles.

After Jasper, we followed the Athabasca River almost to Hinton, where we turned onto the 40 to take the scenic route to Alaska.

We’re now ensconced in the Grande Mountain Lodge, which cost much less than we had expected.  Well, not much less, but less.  It was even less than the motel in Lovell, and is more modern.  We had a good supper and did our laundry.  It’ll be nice to have clean underwear tomorrow for what sounds like it will be a rainy day.

We also had a good supper AND I had another disaster of the day.  The tab broke off the top slider on my “Stitch’s main zipper.  This is the 2nd time this has happened with this suit and I don’t have time to send it to Duluth for a repair.  But when I asked the guy at the Laundromat if there was a hardware store, he wanted to know why.  When I told him, he suggested I come back to the motel and get the suit and let him take a look at it.  I did and he said, “I’m pretty good at McGyvering things,” and got into a little drawer and dug around until he found a small key-ring that was just small enough to go through the hole in the zipper slider.  Voila’!  It’s fixed.

Jim is having right pannier latch issues and my left Denali has lost the set screw that holds the light onto the mount.  But we zip-tied that and it won’t be going anywhere.

Now for some pictures: 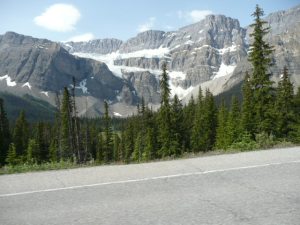 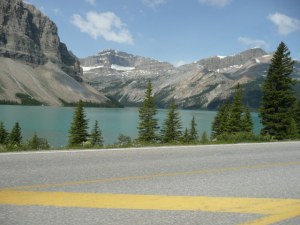 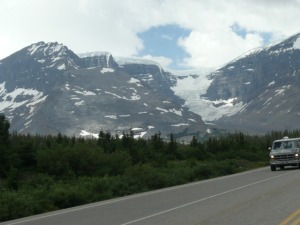 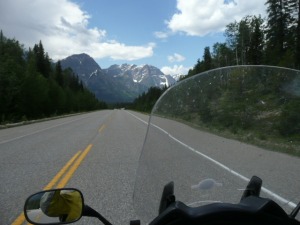 We may have gained some points at a gas station along the Icefields Highway when I noticed that an ST1100 parked near us looked like it had a low rear tire.  Jim went over and told the guy what we thought while I was inside.  The guy was dubious about the possibility of his bike having a low tire, but did check it.  Sure enough, 10 psi.  Jim got his tire gauge and … 10 psi.  The guy had a compressor and pumped it up to 45.  We hope it held air all the way back to Calgary.

And we hope that if we need help, someone will be there to give it.

Tomorrow, we’ll head to Grande Prairie, then Dawson Creek, the beginning of the Alaskan Highway.  If we move along better than we have so far, Fort Nelson (478 miles from here) seems like a reachable goal.  But the weather sounds like we’ll get wet tomorrow and Sunday.  And  it’s going to be cooler for a few days.

2 thoughts on “The Most Beautiful Ride We’ve Ever Taken”