Finally, we break a barrier…

I haven’t been riding like an Iron Butt rider so far on this trip.  Today is the first time we’ve managed to go over 400 miles… 486 was today’s accomplishment.  It was a fitting day that reminded us that not every day is as magnificent as yesterday.

We left Grande Cache at 7:45 (a new record as well) and rode to Grande Prairie.  It was about 115 miles with some beautiful views of the Smoky River, a not-so-beautiful view of a big dead moose, and some “interesting” views of the smaller species of forest rat (mule deer).  Fog and light rain hit us about 45 miles south of Grande Prairie, and oilfield trucks mixed in with a few logging trucks kept us on our toes as well.

In Grande Prairie, we managed to get separated, but the cell phone quickly too care of that.  (BTW, my Viero service and Jim’s Verizon service have been nothing short of outstanding.  Especially since I found my phone.  For those of you who missed it, I had stuffed it into the stuff sack with the tent the morning we left Spearfish.  The reason I couldn’t hear it when Rick tried to call me in the campground there was that I had turned the sound off).

We rode to Dawson’s Creek and had to stop to wake up.  We had been through a number of construction zones where we were slowed down to 50kph (30 mph) for several miles at a time, usually so we could pass a 1-200 meter construction site.  We were both in serious danger of falling asleep.  From Dawson’s Creek we rode to Fort St John to gas up for the next-to-last time.  We put our electric gear on and I closed the vents on my ‘Stitch and changed to my winter gloves.

At Pink Mountain, we stopped due to biological necessity and got caught in a frog-strangler.  By the time I got my wet hands in my gloves and my ear plugs in, Jim had started rolling and the parking area of the little general store where we stopped had turned into a river.  I rode through 4-5″ of running water before I got back on to the highway.  My face shield was fogged up.  My glasses were fogged up.  If  I opened the face shield to clear it, water blew in onto my glasses.  But after about 5 klicks (that’s metric for kilometers), I could see OK.  Not well enough to see Jim stopping for gas at Sikanni until I’d ridden past the turn-in.  I had to go to the top of the hill to be able to turn around and go back down for gas.

Not long after that, just before and just after crossing the Buckinghorse River, I saw my first two bald eagles of the trip.  Jim had got stuck behind a couple of trucks as he pulled out onto the highway and missed them.

We got to our overnight stop here in Fort St John, British Columbia at about 7:30, and wimped out, checking into a Super 8 rather than chancing the projected thunderstorms overnight in a campground.

We should be able to get on the road early tomorrow morning and if we can put in a 12+ hour-day, we might be able to make it to Whitehorse in the Yukon Territory.  It’s only 633 miles.  🙂

Jim staring in amazement at the biggest beaver either of us have ever seen in Beaverlodge, Alberta. 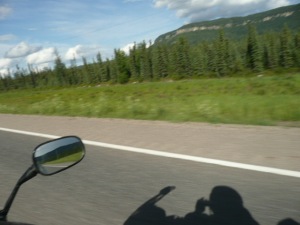 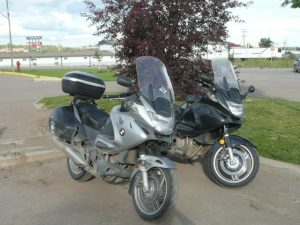 These two poor beasts have been ridden hard, but they didn’t get put away until they’d dried out.

4 thoughts on “Finally, we break a barrier…”