The Last Corner is Within Reach…

I’m in Milford, ME, with Alex Allmayer-Beck (“SailAriel” on the NT-Owners Forum) and tomorrow we strike for Madawaska, the Fourth Corner of the Four Corners Tour.  We have to get there and get a properly-dated, properly-addressed receipt before midnight.  I think we’ll make it.

Yesterday, I left Salisbury, Maryland, and rode 446 miles while adding four more states to my “States Ridden Map:”  Delaware came early, about 20 miles after I started, then Pennsylvania.  As I was riding along on the west side of Philadelphia, I realized that I hadn’t checked Shirley’s navigational impulses (“Shirley,” I’ve decided, is my GPS’s name).  She was skipping New Jersey!

I was just short of the Pennsylvania turnpike that turns into the New Jersey Turnpike and only 36 miles west of New Jersey, so I hopped onto the toll road and “got” New Jersey.  Then I started north and rode through Princeton, still blindly following Shirley’s directions.  Before long I realized she was planning on taking me over the Verrazano Narrows Bridge onto Manhattan Island and up the (I think) George Washington Expressway on the west side of the island.

I didn’t want to go there!

So I started improvising and ended up in a neighborhood in Newark plotting another route (using Shirley’s help, but taking command for myself.  So, I went within a half-mile of where I’d been when I flew to Europe to ride to the European Concours Rally in 2008 — the Newark Airport.  Then I rode through downtown Newark and then onto the New York Throughway (I think they spell it “Thruway”).  I followed that till Albany and then was on US-4, heading for Vermont. 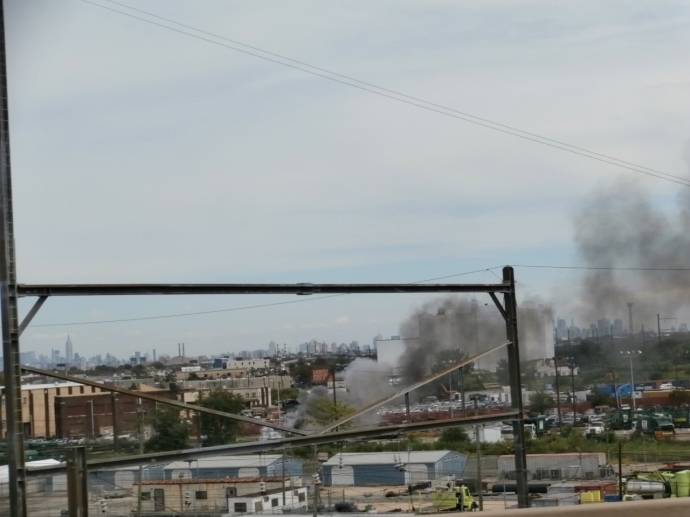 I don’t know what was on fire, but if you look off in the distance, you can see the skyline of Manhattan, including the Empire State Building. 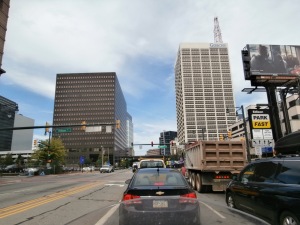 The scenery along the NY Thruway was beautiful, but my battery ran down and I didn’t get the really pretty shots north of Albany where US-4 followed the old Champlain Canal.

I learned that another one of Shirley’s shortcomings is that she doesn’t list as many motels as my old GPS did.  It was getting late and I was getting tired, so I just did a search and she took me to Glenn Falls, NY, a beautiful town that must have been the center of the universe this weekend.  Motels were mostly full and all of them had jacked up their rates.  Some fairly ordinary motels were getting $350/night!  I paid $200 for a Day’s Inn (a very nice Day’s Inn, but not that nice.  After I made a reservation, I ate at Denny’s.

I had fish and they were very good, but when I got to the bike, I realized I was dizzy.  I waited a bit, but then got on the bike and rode to the motel.  By the time I got to my room, I was very dizzy, and wasn’t sure if I’d be riding today or not.

When I woke up this morning, I felt better and after breakfast on Day’s Inn’s $200 nickel, I felt OK to ride.  And it’s been a beautiful day.

An old arsenal in Whitehall, New York, which is, surprisingly, the birthplace of the US Navy.  (I don’t think the arsenal is that old.

[Just a point of information:  if you click on any of these pictures, you can see them enlarged.  And if you put your mouse on the enlarged picture, and click the “+” symbol, you can see it even larger.]

So far, Vermont is the leader in my “Most Beautiful State End-to-End” Sweepstakes. 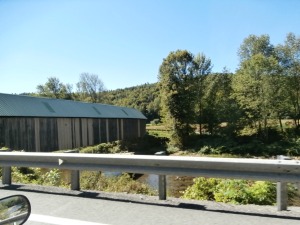 This is the far end of a covered bridge.  Honest. 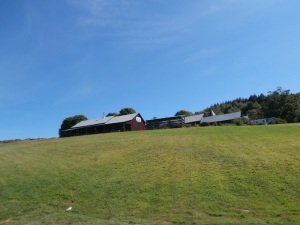 This farm was owned (according to the sign) by “The Fool on the Hill.” 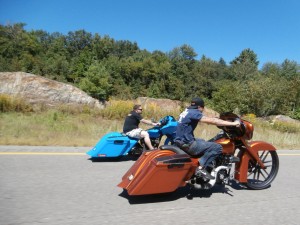 Maine is another state with lots of beautiful trees.  In Vermont, near Killington, I saw a sign that said:  “Free Land!  Must Buy Trees!”

Tonight we’re next to the Penobscot River, which flows into Penobscot Bay, where Alex lives.  On my way back from the Maritime Provinces, I’ll visit Alex and his wife and get to sail with them on Ariel III, their 35′ cutter, on that very bay.

But tonight, it’s off to bed so I’ll be up for the concluding part of 21 days of great riding on the Four Corners Tour.  My Four Corners towel, which bears my own personal number and must be in a proof-of-presence picture at each of the Four Corners, is number 046.  I guess that means that when I registered, only 46 other riders had signed up to try the Tour in 2013.  It’ll be the end of the year before we know how many succeed, but (knock on wood!), but right now, it’s looking as if #046 will be one of those who complete the tour!