Nova Scotia and a Different Pace

I’m in Nova Scotia, riding back roads through beautiful country at a much more leisurely pace.

I only did 177 miles Wednesday!  (I’m writing on Thursday morning after eating brunch at a lovely restaurant/art gallery/emporium in Summerville on the Avon Peninsula, which is part of the south shore of the Bay of Fundy.

I started to title this the “Fundy-est Place I’ve ever been.  From the time I rode into Nova Scotia yesterday morning, I was close to the Bay of Fundy.  I rode to Parrsboro, a pretty little town with a good restaurant right on the beach.

If you’re not familiar with the Bay of Fundy, it’s the site of some of the greatest tidal variations anywhere on earth.  I got to the restaurant about 1/2 hour after low tide and watched it rise several feet while I ate clams and enjoyed a conversation with a family at the next table.

I also talked to a young man from Montreal who was riding his BMW G650GS around Nova Scotia.  He spoke very little English and I speak very little French, but we both spoke “Motorcycle Touring.”  🙂

After eating, I continued east on the north shore, stopping to look at Five Islands and the Five Islands Lighthouse. 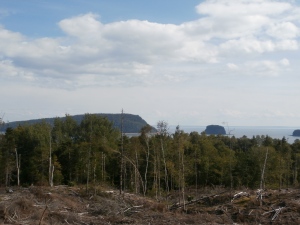 While eating supper, one of the other diners was a young man pedaling a unicycle 70-80km/day.  For the technically-interested, he had a 36″ wheel and 110mm crank-arms.  I can’t even begin to imagine what it’s like riding down a steep hill on that thing!  He carries a tail-pack and a front-pack on the unicycle and a 27-liter backpack on his own back and camps in a hammock.