Today when I woke up at the Maitland Campground, I made the assumption that I wouldn’t have to drive too far to find a place to get that vital first cup of coffee (and a little breakfast).  I was partly right.  It wasn’t very far, but it took longer than I would have expected.  I rode through several communities that were large enough to have names — Densmores Mills, Noel, Tennycape, Walton, Cambridge, and Cheverie — but none of them had any place to get that cup of coffee.  It was 45 miles, and took over an hour before I got to Summerville and then I nearly rode right past the only place I’d see for another 40 miles.  I can’t remember the name of the place, but it was a combination Inn/Art Gallery/General Store/Café that had great food and service at very reasonable prices.

I ended up staying there for two hours, hoping the sun would break through the low overcast to take the chill out of the humid air.  That hope was about as forlorn as my earlier hope for a quick breakfast.

When I left, it was starting to rain.  It wasn’t the kind of frog-strangler I’d had in Florida and Georgia.  Those rains were at least warm, but this one was persistent and chilling.  After a few miles I stopped to dig out my heated jacket liner and my winter/waterproof gloves.

I also ditched my tentative plan to ride through Digby on my way to Cape Sable, the southernmost point of land in Nova Scotia, and the graveyard of a thousand ships.

Digby is the host to the Wharf Rats Rally this weekend.  In a town of about 2500, 50,000 motorcyclists show up.  Honda is one of the sponsors, as is Harley-Davidson, who will reportedly do the Canadian introduction of their 2014 water-cooled Electra-Glides in Digby.

I opted instead to come to Lunenburg, a UNESCO Cultural Heritage site.  Lunenburg was one of the major ports during the Grand Banks cod-fishing days.  It’s also the home port of the Bluenose, one of the greatest of the Banks fishing schooners, and the multi-time winner of the International Fisherman’s Trophy which went to the winner of a race between these working fishing boats.  Today, the Bluenose II, a replica of the original that was built in 1963 and rebuilt in 1997, is here in port.  I’ll see it and more of the waterfront tomorrow.

Tonight I ate at a very nice restaurant in the old “fish factory” which houses the Atlantic Fisheries Museum.

Lunenburg is one of the places I really wanted to see in Nova Scotia and I may stay another night.

Here are a few of the few pictures I took today (the camera isn’t waterproof and gets stowed away when it rains). 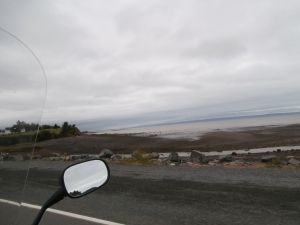 The angry and muddy waters of the eastern end of the Bay of Fundy; across the Bay, you can see some of the places I visited yesterday.  The muddy water is the result of the tide flowing back out of the rivers and creeks that feed the Bay. 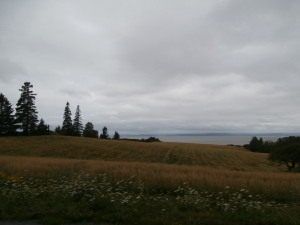 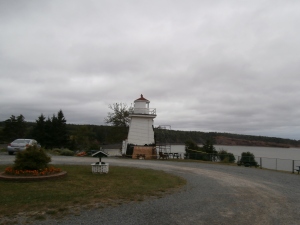 This is the light at Minas Basin.  It and the two I saw yesterday, the Parrsboro Light and the Five Islands Light, were all a bit disappointing.  I had expected tall, majestic structures, but all of these lights were almost diminutive.  You can see that this one has open windows to keep the light from annoying the people who live on its landward side.  The Five Island Light had originally been mounted on one of the islands, but they kept washing away.  It’s current position is  7km, about 4 1/2 miles north (landward) of its original position.  It had first been a kerosene-fueled light, then electricity lit its bulb.  As far as I know, in these days of GPS and radar, none of the lights are maintained by the government.  At least the Five Islands Light and the Minas Basin Light are now being preserved by associations dedicated to local history.

Today was the shortest day I’ve had mileage-wise (except for the Saturday in Fairbanks when all the riding Jim and I did was to into town to find me a new pair of summer gloves and ride around the ramp on the general aviation side of the airport, looking at gawking at old airplanes.  And it was also the first day since we left Spearfish on July 14th that I have bought no gas for the bike.