One Down, Three to Go…

Rick joined me Sunday night after doing a two day ride from his home in Henderson, NV.  We got up on Monday morning, loaded up, got our beginning pictures documenting the first corner in Blaine:

The International Motel, a friend of Four Corners Riders and

and the Blaine Police Department (while Rick was taking the picture, an officer pulled up with his lights flashing… but he wasn’t after me for being parked in a no-parking zone; he was stopping a scofflaw of some sort).

We rode down I-5 a ways and then went to Annacortes and Whidbey Islands, passing NAS Whidbey.  The entrance is marked by two Grumman A-6s.  Jim and I had talked (during a wait for a construction pilot car east of Tok on our way out of Alaska) to a man who had maintained the radar and computers on one of them when he’d been in the Navy. 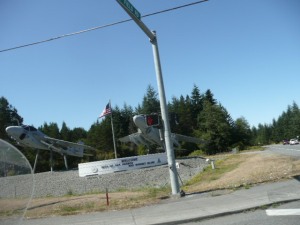 We made it to the ferry and had about a half-hour wait till it came in.  Motorcycles are first on and almost first off.  This was the motorcycle gang: 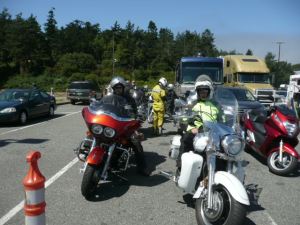 It was foggy all the way to Port Townsend, but cleared off just before we docked.

Traffic from Port Townsend to Port Angeles kept our average speeds pretty low.  And once west of Port Angeles, a law-abiding citizen driving prudently 5mph under the speed limit and ignoring the fact that about 20 vehicles were backed up behind him and the fact that signs said that having more than 5 vehicles slowed down required you to use the turnouts thoughtfully provided by the National Park Service, kept us very slow.  It wasn’t till Forks, that we began to be able to move at the speed limit.

We rode near the coast for a bit and were in fog and temperatures that got down to 48F.  I got chilled and when we stopped at Hoquiam, I put on my heated jacket and used it all the way to Warrenton, south of Astoria.

We found a great seafood place, Doogers, and enjoyed supper before going to the KOA a few miles west of there and being ripped off.  We were charged $50 because the space we were assigned had water and electricity.  What it didn’t have was enough grass to be able to put two tents on it.  Oh, well… it was late and we were glad to get to bed.

Day 2 of the Four Corners Ride:

We rode down to Seaside, ate breakfast at McDonalds (Rick and I are 2 for 2 now on that score), got gas and headed south.  I tried to take us to a beach where my first wife and I and some friends were robbed back in 1986, but missed a turn and instead took us on a slow tour of Cannon Beach… the town Cannon Beach, not the beach Cannon Beach.  All the way down to south of Tillamook, where we didn’t try any cheese or go to the Aviation Museum, we crept along.  By that time, we’d decided that while the Oregon coast is beautiful, we only have 19 days remaining to get to Madawaska, Maine, and the Oregon Coast isn’t that beautiful.

We left the coast at Hebo, and took a great road to Salem.  Then we hopped on I-5 and proceeded to cook.  The temperature was in the high 90s and hit 100 for a few minutes.  Scenery went away as we went south because of smoke from forest fires.  Between Grant’s Pass and Medford visibility was down to less than a mile.

When we got to Ashland, we stopped to try to confirm that the campground I ad in the GPS as our destination actually had campsites available.  We couldn’t do that because they wouldn’t answer their phone.  So rather than strike out down the Klamath River Road, CA-99 (a road I used to study from the air as I flew to Oregon back in the day when I worked for Drilco and could fly myself around on business), we called Motel 6 in Yreka, and got the assurance that they’d keep the light on for us.

So that’s where we are.  Motel 6, Yreka, CA.  Tomorrow, it’s the Klamath River Road to Arcata and Eureka.  We’ll get on CA-1 at Leggett, and follow the northern California coast to Mt. Tamalpais and San Francisco.  BTW, I don’t think we’ll get that far tomorrow.  🙂

I’d love to post all the magnificent pictures I took today, but my memory card for the camera was riding along in my trunk, in this computer.  So, I’ll just tell you how great they were.

They  were really, really, REALLY good.

One of the ones I wish I had was a picture of my odometer as it passed a milestone that is (for me) a significant number.  Just south of Roseburg, it turned all sixes:  66,666 miles.