It’s done!  I’ve reached the Fourth Corner of the Four Corners Tour.  Alex and I knew we only had a bit over 200 miles to ride today, so we lingered over breakfast talking until about 11:00.

Then we blasted up I-95.  It’s a basically empty road with a 75mph speed limit and very little traffic.  It might go through lots of pretty scenery, but you can’t see it for the trees.

We made it to Houlcom and got onto US-1 (the road that starts in Key West).  It went through some small towns with 25 and 30mph limits, and never had a speed limit of more than 55, but it was much more scenic.  We ate a good lunch at a little café in Mars Hill, Maine, and kept coming.

We got here to Madawaska at about 5:10 and I got my finishing corner gas receipt .  Then we went across the street to the Post Office and I got one of my “official” finishing pictures: 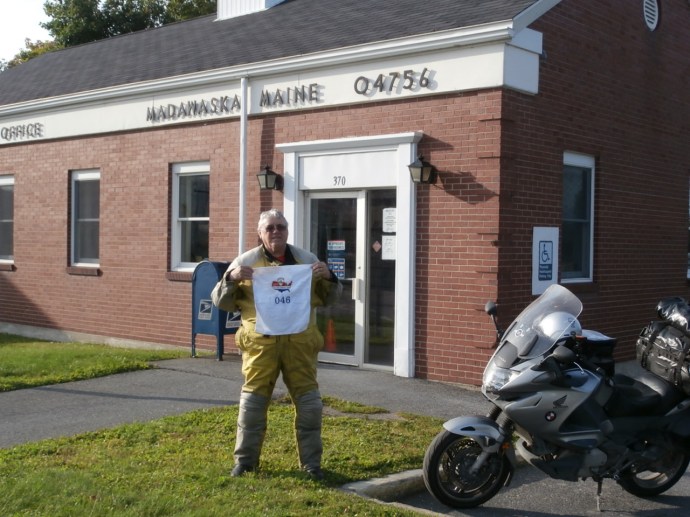 Then it was another 1/2 mile west to the Madawaska Four Corners Tour Park, where we took another “official” finishing picture: 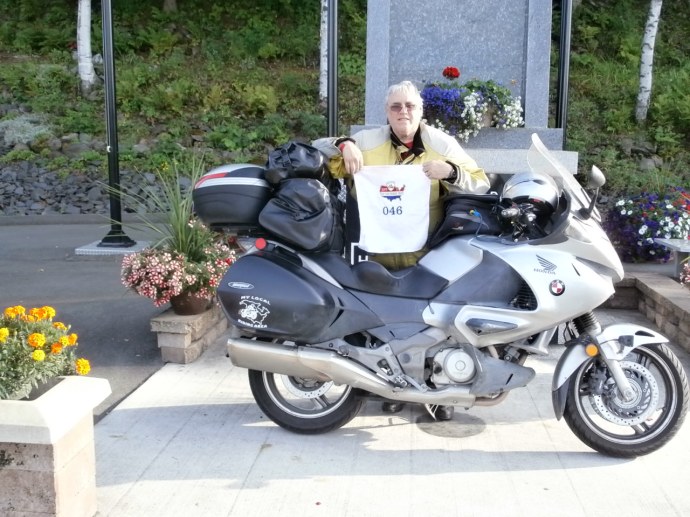 Then it was check-in time at Martin’s Motel, a Four Corners-friendly establishment.  The owner has made “I visited Madawaska, a Corner on the Four Corners Tour” stickers and I’ll put mine on the bike tomorrow.

While we were unloading, I looked at Alex’s painfully pristine ST700 (a rebadged NT700) and couldn’t stand mine any longer.  I still had bugs on the bike that I’d picked up on my way to Spearfish on July 10th!  So it was off to the car wash, where I spent $10.00 getting the bike pretty clean.  After I get home I’ll get some of whatever it is that Alex recommends for getting back to the original black from my currently badly faded grey plastic.

Here are some pictures from today’s ride:

Way off in the distance you can see Mt. Katahdin.

A river…don’t ask me which one because I don’t have a clue.  Lots of rivers in Maine!

Tomorrow Alex will head back to Camden.  I’ve got some personal business to take care of before I leave Madawaska, so I might end up staying here another night.  When I get over into Canada tomorrow or day after, I’m going back to camping.  I won’t be needing to keep to a schedule the way I have for the last three weeks.